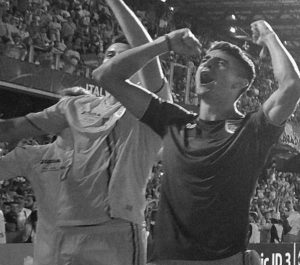 CESENA, ITALY – JUNE 24: Romania players celebrate after they qualified for the UEFA U-21 semi-finals after drawing 0-0 with France during the 2019 UEFA U-21 Group C match between France and Romania at Dino Manuzzi Stadium on June 24, 2019 in Cesena, Italy. (Photo by Denis Doyle – UEFA/UEFA via Getty Images)